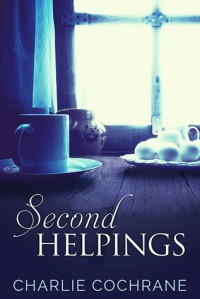 I love a good second chance at love story as much as the next reader. I’m the rose colored glasses, heart on her sleeve sort who believes everyone deserves a chance at happiness, even if it takes him a few tries to get there, which is the premise of Charlie Cochrane’s newest release, Second Helpings.

Stuart Collins is still grieving the loss of his partner, having a difficult time thinking about moving on after Mark’s unexpected death, let alone acting on the idea of finding someone new. But watching his father picking up the pieces after his mother’s death gives Stuart some reason to think it might be time to try and live again. Trying is easy. Turns out it’s the succeeding that’s the challenge, and each small step Stuart takes is one big tug at the heartstrings. His lack of motivation, let alone success in moving on, stems from the fact that Mark was the love of Stuart’s life, his perfect partner in every way, and it’s an issue the author puts to good use to create the angst in the story.

Paul Franklin is in a relationship. It’s too bad, really, that his boyfriend doesn’t know it. Paul is carrying on a one sided, long-distance romance with a man who can’t even be bothered to call, email, or text every once in awhile to reassure Paul he’s still alive. When Paul discovers his mother is dating Stuart’s father, he decides it’s time to vet the senior Collins via the son to make sure she’s not going to end up with another loser like his own father was—a pattern Paul himself seems to have fallen into when choosing men—and this is where the crux of the story begins, the point where Charlie Cochrane begins to weave in the various speed bumps these two men face on the road to togetherness.

Second Helpings isn’t quite an enemies-to-lovers story, though Stuart and Paul certainly don’t get off on the right foot with each other. They both manage to say things that touch exposed nerves, yet still they abide the gravitational pull that keeps bringing them together. Stuart is ready to start over again with someone new, and it’s Paul who trips his libido. Paul has read all the signs of his lover’s silence and interpreted it to mean he’s a single man again. Stuart’s easy on the eyes and a nice guy when he’s not elevating Mark to sainthood. And, that’s the plot of this book in a few simple sentences. Second Helpings is an uncomplicated book with a lot of heart.

Having read more than a few Charlie Cochrane books over the years, I can say with certainty that this short novel is delivered in her dependable style—fluid and effortless prose, with characters by whom I was immediately engaged. If I had any qualms at all with Second Helpings, it’s only in the fact this particular storyline, the essence of it, has been done before, though not always as well as Charlie Cochrane does it. Consider Second Helpings comfort food for the romantic soul: a sweet, read-it-in-one recipe, a relatively angst-free love story between two men who need each other more than they could’ve imagined. If you’re looking for a book that will make for an effortlessly entertaining summer read, this book is precisely that.