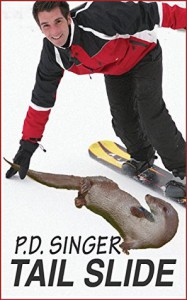 How did we get from werewolves to otters? Well, you take authors who perhaps have a fondness for a particular species of animal, add a dash of imagination, and the next thing you know, they’re shifting birds and squirrels and opossums and, well, now otters in P.D Singer’s Tail Slide, a short and sweet, fun and sexy little treat.

Lon and Corey meet on the slopes but take the real action back to Corey’s place, where Lon’s otter gets the best of him and creates a little havoc. It’s a secret Lon didn’t want or expect Corey to discover quite so early in their meeting, but how can a guy resist an adorable otter who knows the true meaning of the word playful? And mischief. Lon gets up to plenty of mischief too, in this short little tale. The answer is, Corey can’t, and, as it turns out, it adds up to what could be the start of a beautiful romance.

If you’re in the mood for something lighthearted, doesn’t take itself at all seriously, and stars one shifty little otter and the man who seems his perfect mate, this Small Gem might be just what you’re looking for.