Boystown 6: From The Ashes: A Nick Nowak Mystery 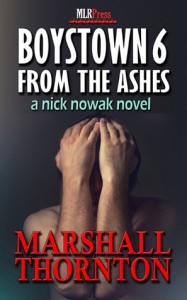 The following is the reason I picked up the ebook version of Boystown 6: From the Ashes for review:

I had just finished listening to the first Boystown mystery on audio. I really enjoyed the first three short stories and thought, why not skip books 2, 3, 4, and 5? (I didn’t own them…yet…by the way.) Since the first three mysteries were considered standalones, I could read the others later, right? I thought I’d be lucky and find out Boystown 6: From the Ashes also was a standalone. Um. Not. By the time I hit the second chapter of From the Ashes, I realized, that yes, I was going to have to go back and read books 2, 3, 4, and 5 to figure out what the heck I just got myself involved in. After spending some time at All Romance (hey, I hit it lucky. There was a half price rebate sale going on), I bought the books in the series I didn’t already own, then proceeded to read the series in the order it was written.

Man, oh man, what an adventure that led up to From the Ashes! See, something happened while reading all these stories. I developed a love/hate relationship with Nick Nowak. The man is definitely into sex. I mean every chance he gets, but let’s not go there for now.

This mystery takes place a year after Bert Harker’s murder and as the blurb states, Nick has really let himself go in his grief. He’s crossed over the threshold into alcoholism, though is a functional alcoholic, and he bartends in exchange for money and alcohol.

I don’t think I’m revealing too much when I say that it is Mrs. Harker who finds out where Nick is working and asks him to look into the death of Father Maniatis. Mrs. Harker believes that there is more to his sudden heart attack and asks Nick to look into it. Now, the reason Mrs. Harker is considered the most unlikely person to ask for Nicks help is because these two have not liked each other since they met, back when Bert first became sick with AIDS.

After visiting the Catholic school, something just isn’t right when one of the priests objects to Nick poking around in Father Maniatis’s death. Nick relays this information to Mrs. Harker and then decides to investigate further. They come to the agreement that instead of being paid, Mrs. Harker will show him the family photo album. Mrs. Harker is kind of cute with how she doles out in increments Bert’s childhood photos, but it’s also these times that I found rather sad and bittersweet, as Nick and Mrs. Harker sat together looking through this album. Even though these two started off disliking each other, I think these little moments of looking back at Bert’s early life helped with their grieving. I know I had a few tears in my eyes at the final picture.

As usual, Mr. Thornton weaves a very tangible mystery that keeps one guessing until the very end, and it’s also a chance to look back at the 80s, to a time when a little known virus was hitting the gay community. I’m giving Boystown 6: From the Ashes a high 5 Star rating and would also highly recommend reading all the previous Boystown mysteries, in their given order, to really appreciate this latest installment.