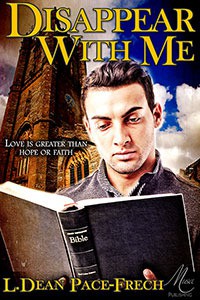 L. Dean Pace-Frech delivers a heart-wrenching lesson in history in Disappear With Me, the story of a man who is caught between religion, love, and the law in the days following the end of King Edward VII’s reign.

The Reverend Leander Norris is a man who stands accused of sodomy in a time when the only basis for a gross indecency trial, and an almost certain conviction, the judicial system needed was an accusation. Told through a series of flashbacks, the narrative offers the reader a glimpse into Leander’s coming-of-age as an orphan whose lessons included studying the Bible, chapter and verse. The author peppers those verses throughout the book to bring home his message and demonstrate how readily interpretation of biblical text can be a rather divisive thing when it’s used to justify both love and intolerance.

The emotional tenor of Disappear With Me is incredibly poignant, made all the more so because of the time in which this story is set, and I applaud Mr. Pace-Frech for not resorting to the deus ex machina to manufacture an ending to the book that would’ve conflicted with that setting. Leander’s own personal convictions and his faith in an unconditionally loving God impart so much emotion in this novel, and it’s his strength and courage to face his accusers, in spite of the near certainty he won’t be found innocent, that resonates so deeply and left me on the verge of tears so frequently. Though Leander is a fictional character, it’s the author’s own faith that shines through in the telling of his story, and it’s with that in mind that I couldn’t help but embrace Leander for his bravery and his want of something more than just a momentary physical bond with someone.

What is inarguable in Disappear With Me is that Reverend Leander knew great love in his life in spite of a puritanical society—a young and ultimately challenged love with Raphael that couldn’t endure the strain of necessary discretion; an eleven year relationship that was a marriage in every way but legally; and the affair that was finally Leander’s downfall as he stood accused of the crime of wanting a love of his own, and then refusing to deny that he’d loved deeply.

While the end of this book doesn’t offer a traditional happy ending, what it does offer is a promise, the hope that Leander could become an agent for change and the hope that he will be offered a second chance at a love to call his own, something everyone deserves.

Reviewed by Lisa at The Novel Approach